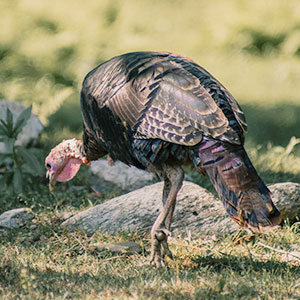 There are four main types of wild turkeys in North America, creating what hunters like to call the “Grand Slam” should they be fortunate enough to have taken them all: the Rio Grande, Merriam’s, Osceola, and the Eastern Wild Turkey which was first encountered by the Pilgrims, and never forgotten by hunters ever since. Wild turkeys have incredible vision and hearing, making them one of the most difficult, but fun species to hunt.

The eastern wild turkey has several cousins around the contiguous U.S. including everywhere between southern Canada, Mexico, Texas, and even as far south as the Osceola in Florida. The eastern variety is found from around the Mississippi River east to the Atlantic coast and all the way through New England. This wild turkey was hunted almost to extinction, but with restoration efforts in places like New York State, this venerable hunting foe is now living in numbers never thought to be seen again.

Lifecycle of the Wild Turkey

Maybe the best thing about this awesome bird is the fact that it breeds in the spring of the year. Gobblers generally have a pecking order of younger males up to a boss Tom that will have a harem of hens with which he will mate. At times, he will have a rival and then the two will fight for control of the local breeding hen population. Toms will fan out and “strut” to attract a mate, including a loud, resounding gobble. Hens will lay their eggs soon after in clutches of 10-15 that will incubate for about a month before hatching.

Wild turkeys have an array of areas in which they will live. In some parts of their range, they live in flatter farmland and wooded areas, and in other parts of even the same state they will live and breed in much more hilly and remote areas. They are well adapted to live in such a variety of places that this venerable bird can exist almost anywhere where they can find food, including areas that are quite urban. Turkeys tend to roost for the night, each night, in the branches of tall trees, including hardwoods and conifers alike.

Wild turkeys are known for their incredible vision and hearing. Some hunters have said that if a wild turkey could also smell you, you would never see one in the wild! They are subject to the dominant gobbler in the spring, and to the matriarchal hen in the fall, and tend to stay in groups throughout the year. Turkeys are one of the only birds of North America to have been domesticated as anyone having a beautiful bird for Thanksgiving dinner will attest to.

Characteristics of the Wild Turkey

Male turkeys, or gobblers and Toms, have iridescent bronze feathers that look to create white-tipped bars when they are fanned out in excitement. They have a snood, which is an erectile, fleshy protuberance on the forehead and a red, fleshy wattle along their neck. The male of this species is especially known for its “beard” or tuft of feather that protrudes from his chest, and for the spurs on his legs that he uses to fight off rivals. Hens, on the other hand, are much plainer looking, helping them to blend into the forest cover, especially when they are actively nesting. Hens have a similar looking bronze feather pattern, but aren’t as big as the gobblers.

Wild turkeys eat a wide range of foods including acorns and other nuts, seeds, wild fruits, insects, (they are especially fond of grasshoppers) buds, fern fronds and even salamanders! A flock of turkeys can sweep the forest floor of leaves in no time flat and when they are done foraging in an area it may look like a street sweeper went through.