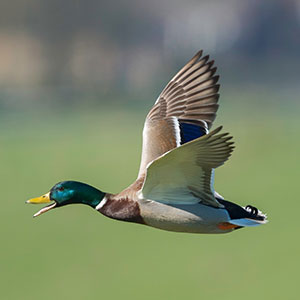 Some of the best wing-shooting that can be done involves the taking of waterfowl. Whether over the water or in a cut grain field, duck hunting can be a rewarding experience for young and old alike. There are several flyways in North America including the Pacific Flyway, Central Flyway, Mississippi Flyway, and the Atlantic Flyway. Setting up a block of decoys on your favorite pond, river, or lake not to mention a farm field can provide some of the best action shooting action a hunter can have, especially for a youth hunter.

Many if not most of North America’s puddle ducks are similar in the way they live out their lives, with some differences to be sure. In that way, we’ll just look at what we feel is the most common: the mallard. Roughly about 24-inches long and with a three-foot wingspan, the mallard is one of our favorite birds to hunt. The greenhead, as the male is fondly called, has a somewhat copper-brown chest and white band on his wings called the speculum. Females or hens are a more mottled brown, drab color which helps them to hide during the nesting season.

Mallards tend to stay in groups, although during the breeding season they will pair off. They are birds that migrate in the fall to leave behind frozen lakes and ponds in the north, and travel further south to have better access to food and shelter, regrouping in the spring to move north again to breed. Many mallards overwinter in a northern climate, staying for most of the winter. The mallard is the forbearer of most domesticated ducks around the world.

Most puddle ducks breed in the spring of the year, courting hens and fighting with other drakes for breeding rights. Once breeding has happened, the hens will seek out hidden brushy areas in and around the water to lay her clutch of eggs which usually consists of 8-10, sometimes being a dozen or more! Her eggs incubate for about a month before hatching and at that time the mother will lead her brood immediately to the nearest water. In about 8-10 weeks, the chicks will fledge.

Puddle ducks love to live in and around the waters of lakes, ponds, rivers, streams, and are particularly fond of beaver ponds. In fact, any marshy area where there is cover and water combined will find puddle ducks happy and content. States such as New York, Illinois, and Missouri offer puddle ducks this habitat they love. States such as North and South Dakota and Nebraska are a part of the pothole prairies that puddle ducks such as the mallard thrive in.

Most puddle ducks eat the seeds of grasses and the leaves, stems and seeds of aquatic plants. Ducks of this nature will also eat emerging aquatic insects, even crustaceans and mollusks. In the pothole prairie region, they forage for planted grains such as rice, corn, oats, wheat, and barley. Puddle ducks are most happy when able to use the shallower waters of ponds and sloughs that allow them their tip up style of feeding.

Puddle ducks call almost all of North America their home, from as far south as New Mexico and Central America, to as far north as Alaska and the tundra of the Canadian wilderness. There are four specific flyways that these ducks use including the Pacific Flyway, Central Flyway, Mississippi Flyway, and the Atlantic Flyway. Hunters can hope to find these birds over most of this range, hunting cut grain fields such as corn, or on the shores of even the largest of the Great Lakes; along both coasts of the U.S., even on the saltwater.